Below are the steps and guidelines on how to apply and get a Tuvalu Fishing Permit.

The cycle shows how to get a Tuvalu Fishing Permit

LN 6.20 SOE Regulation – The Management & Minimisation of the impact of coronavirus Regulation 2020

The Tuvalu Fisheries Department has received financing from the World Bank toward the cost of the Pacific Islands Regional Oceanscape Program (PROP) and intends to apply part of the proceeds for consulting services.

The consulting services (“the Services”) requires an independent and external assessment of Tuvalu Fisheries Department’s efforts to maximize the value of its Vessel Day Scheme (VDS) allocation and the resulting revenue and other economic benefits derived from the purse seine fishery in Tuvalu waters.

The Tuvalu Fisheries Department now invites eligible individuals (“Consultants”) to indicate their interest in providing the Services. Interested Consultants should provide information demonstrating that they have the required qualifications and relevant experience to perform the Services (attach curriculum vitae with a description of experience in similar assignments, similar conditions, official copies of certificates and transcripts etc.). Firms’ staff may express interest through the employing firm for the assignment and, under such situation, only the experience and qualifications of the nominated individual shall be considered in the selection process. The criteria for selecting the Consultant are:

The attention of interested Consultants (including firms) is drawn to paragraph 1.9 of the World Bank’s Guidelines: Selection and Employment of Consultants by World Bank Borrowers (January 2011 edition)

Further information can be obtained at the PROP Office, Alapi OR Fisheries Department Office, Teone during office hours from 0900 to 1600 hours.

All expressions of interest must be addressed to the Director of Fisheries, Department of Fisheries, Ministry of Fisheries & Trade, Alapi, Funafuti, Tuvalu and be delivered by e-mail to: proptuv@gmail.com / proptuv@tuvalufisheries.tv email address no later than 17th December 2021.

The Tuvalu Fisheries Department (TFD) is seeking quotations for the supply of 7 small flake ice machines for installation in Community Fisheries Centres in the outer islands of Tuvalu.

We require a flake ice machine that can produce 350-500 kgs of ice per 24 hours under ambient conditions of water temperature 25○C; and ambient temperature 35○C. This should be a robust machine, designed for trouble-free operation in a harsh and very corrosive climate. Single-phase power (220v) is preferred and should be protected against power cuts and voltage fluctuation. This should be a self-contained unit that can just be plugged in and connected to a water supply to start operation. It should be provided with a suitable insulated ice storage bin with a capacity of 300-500 kgs of ice.

The quotation should include shipping and insurance for delivery to Funafuti port.

Interested bidders should submit the following information in support of their proposal on the attached forms:

Proposals should be sent by email to the Fisheries Department Office by 3.00 p.m. on Wednesday 10th November 2021, to the TFD procurement officer at tnivaga92@gmail.com and copied to michaelb@tuvalufisheries.tv

This request for proposals should not be construed as an offer to any company contacted. TFD reserves the right to reject any or all proposals and to negotiate with any bidder if the original proposal is not acceptable.

The proposition is looked for from reasonably qualified and experienced Experts to undertake the proceeded change handle of the NAFICOT.

Please click on the provided link here at Signed_CP04_2122 NAFICOT to view full details of the Terms and references, instructions to bidders and as well as FFA Standard Conditions of Contract for this proposal.

The Tuvalu Fisheries Director together with senior Fisheries staff, witnessed the signing of the contracts of five newly recruited Community Fisheries Officers (CFOs) as well as the awarding of Sea Safety Train the Trainer Certificates for the 10 participants, at the Fisheries office this morning at 10 am.

There are 7 new CFO’s and while five have signed their contracts today, the other two will sign later in the week when they arrive from their home islands.

At the same time, the Director of Fisheries presented the 10 officers with their certificates of participation in the Sea Safety Train the Trainer Training. This online training was arranged by FAO for participants from Fisheries, TMTI and other agencies involved in small boat safety.

The Director of Fisheries, Samasoni Finikaso said, “A big thank you to New Zealand and the TFSP for providing financial assistance and backing this plan to have a CFO in each of the outer islands. The TFD is confident that these newly recruited officers will be a benefit to each of their respective islands to improve the development and management of outer islands fisheries”.

This week will involve some team building for the CFOs, and preparing materials and equipment to be shipped to the outer islands. The next two weeks of training will be conducted at Tuvalu Maritime Training Institute TMTI, followed by four weeks of briefings in the TFD office; and then three weeks of practical training in FADs and FAD fishing, fish processing and fisheries data collection.

The Program ended with refreshments prepared by the Fisheries Social Committee.

The Tuvalu Fisheries Department is inviting suitably qualified Tuvalu citizens of a minimum age of 18 years to fill the vacant position of Outer Island Data Collectors (OIDCs) for the island of NUKULAELAE.

Applicants must be physically and mentally fit and should be permanent residents of the island of Nukulaelae, as the selection will be island-based. The objective of the recruitment is to create a team of data collectors to collect information on fishing activities and catches on the islands of Tuvalu on behalf of the Fisheries Department.

Each data collector will be responsible for organising his/her time to interview fishermen, collect data and properly measure and weigh all fishes caught and landed by fishermen in sample landings. All data collected will be transmitted to the Tuvalu Fisheries Department by hard copy on each trip of the inter-islands shipping services and where possible electronically.

Detailed terms of reference of these positions, remuneration package and other relevant information are available for collection at the Coastal Management Unit of the Fisheries Department Office or by sending an email to samfinikaso70@gmail.com.

All applications are required to be addressed to the Director of Fisheries, Tuvalu Fisheries Department, Teone, Funafuti before 4:00 pm on 17th September 2021 by either hard copy or email to samfinikaso70@gmail.com before the closing date and time.

Please ensure you attach all the following information as your application: 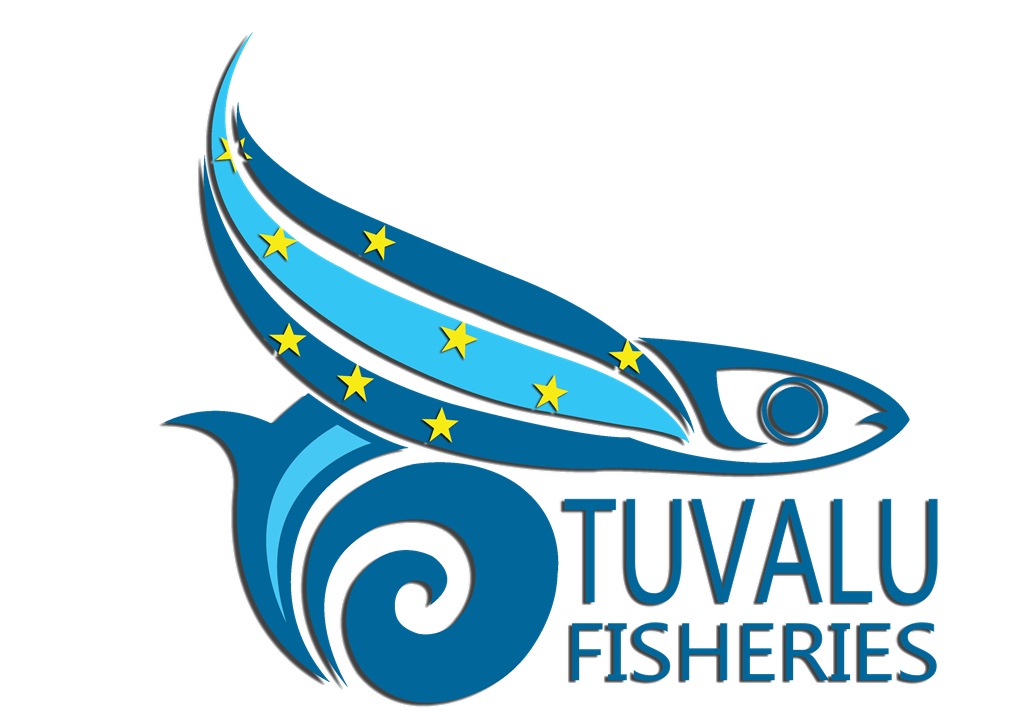 The seven new CFOs and the island that will be their work base, are:

The 7 new CFO’s will start with a training program of around 10 weeks. Depending on travel arrangements, this will begin on 13th or 20th September through to the end of November this year. The program includes two weeks of training at the Tuvalu Maritime Training Institute TMTI, four weeks of training in the TFD office and three weeks of practical training in FADs and FAD fishing, fish processing and fisheries data collection.

Tuvalu Fisheries Advisor, Michael Batty said that the CFOs are a new initiative to strengthen the outreach of the Fisheries Department and provide a service to fishermen and the community. It also adds to the employment opportunities for young people in the outer islands.

These new positions will be under three-year contracts funded by the Tuvalu Fisheries Support Programme Phase 2, TFSP2 and to be continued after that through government funding if possible. 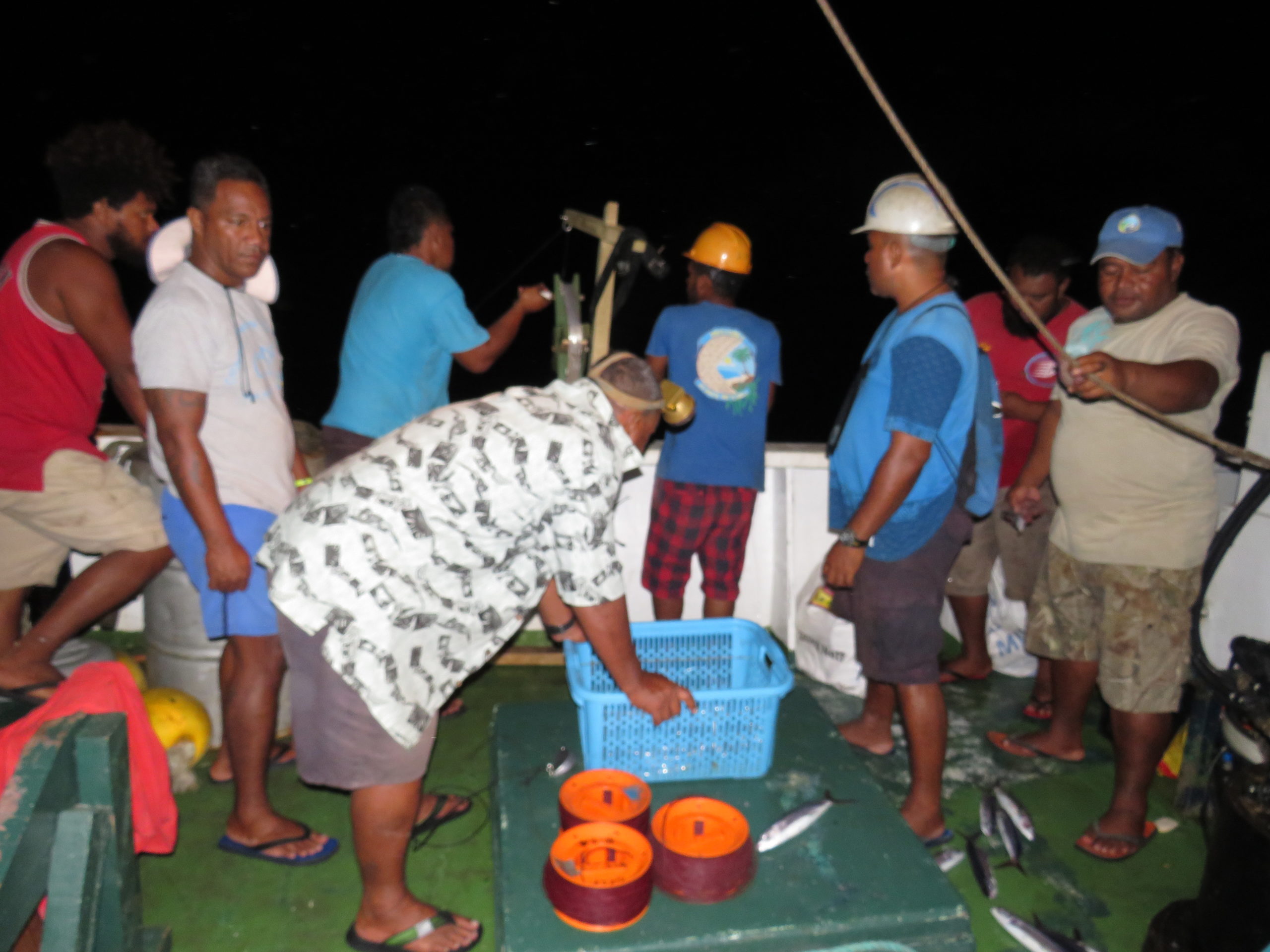 Four TFD staff travelled on the old RV Manaui early this month to conduct new fishing methods training to 20 fishermen on each remote northern island of Tuvalu included, Nanumaga, Nanumea and Niutao in order to further their knowledge on new fishing methods utilizing new fishing gears provided by the Overseas Fisheries Cooperative Foundations OFCF, Japan. These new fishing techniques were developed to adapt local fishers so that they might also specialise in pelagic species instead of fishing and disrupting inshore marine resources.

The training began with the in-class session with tackle handed out to each fisherman as well they were taught on the installation of every gear. The second portion of the training is where fishermen went out to sea on the old RV Manaui from 2 am to 2 pm for a practical on four forms of fishing, includes vertical longliner fishing, squid fishing, electric reel fishing and mid-water trawling utilizing their new fishing gears.

Nelly Seniola, Fisheries Operation & the development Training Officer, stated, “This fishing trip training is a five-yr program. The govt of Tuvalu is working in collaboration with the OFCF project in Japan on the supplying latest fishing gear”.

‘Nukulaelae and Vaitupu were the first islands to place this training into practice,’ he added.

One of the participants of the training, a fisherman from Nanumea commented that he did learn a lot of new things like fitting new fishing gears and therefore the most vital piece is that he can do other sorts of fishing methods rather than just trolling because it was the principal sort of fishing that they used to which is expensive and time consumed.

Training began on Nanumaga Island, followed by Nanumea and finally on Niutao Island. The training was progressively completed in the week along the island of Niutao where TFD personnel have returned safely back to the capital, Funafuti, today Sunday, August 29th.

The Tuvalu Fisheries Department (TFD), implementing the New Zealand funded Tuvalu Fisheries Support Programme Phase 2, is seeking quotations from suitably qualified and experienced local building companies for some minor construction work to improve the area on the lagoon side of the TFD Office at Teone.

1.     Request for quotations with bid and contract form;

3.     A list of materials that will be provided by the TFD;

Or you can pick up a set of these documents free of charge at the TFD Office.